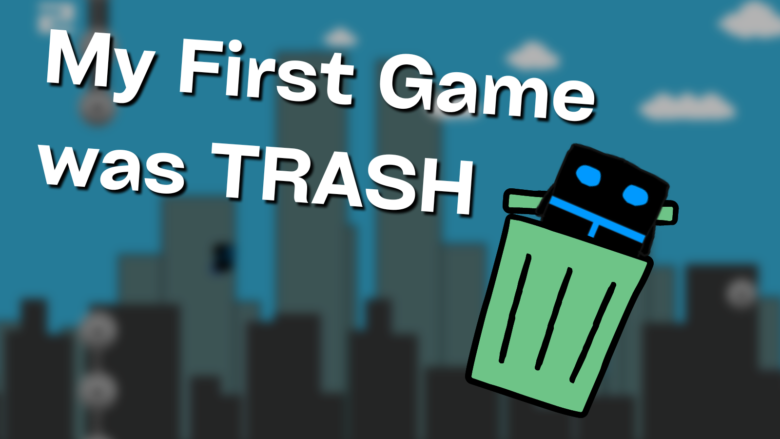 I was thinking about writing a few posts about my first game. Not like REALLY my first game because you can’t call red quads on an android screen a ‘game’.

But I want to go through my old games and do some analysis from my current perspective as a game developer.

My first intro to game development was in 2013 (I was in highschool) when I was just wondering how Flappy Bird was made. Then I played around with Eclipse (there was no android studio I’m old) and did some weird red quads on a screen just going from the top part of the screen to the bottom on my android.

And then when you clicked one of the red quads it disappeared. Like magic. God bless that tutorial I watched lol

Then I moved on to GameSalad. Made a couple of Flappy Bird Clones and paid the Google Play Store fee to become a developer there with a friend from highschool then we started to publish these ugly clones at the end of 2013. It is indeed very funny looking back to it now and that’s not the focus of this post but damn those were some funky stuff I made hahah

Then at the beginning of 2014, last year of highschool, this friend of mine discovered something called Unity and I was fascinated by it. I just didn’t know what the hell was C#. But I did knew there was this thing called Unityscript and it was easy!

So I started watching some Brackeys tutorials (btw thank you Brackeys) and got into Unityscript doing the ball platformer, and other stuff. We tried several ideas but nothing really worked. Then I said well let’s try to make a Flappy Bird clone again! That’s original!

Then I searched a lot for a ready to use clone of Flappy Bird for Unity but found nothing with Unityscript. But I DID found some written in C#…. I thought “let’s do it” I downloaded it and started editing it. And OH BOY it was ugly. My coding skills were so bad I was afraid to use arrays because I didn’t know how they worked. Then I added support for multiple characters like this:

You can think oh well that’s not too bad but for every enabling/disabling of a character I’d have to disable/enable every other one. Resulting in multiple unnecessary lines of code. Then I converted the portrait display to a landscape one, added some saws, drew all characters by hand and my friend created some music on GarageBand so we could use it.

Then End Hunter was born.

I remember releasing it and being like “omg what people will say about it?” (this was a time where already any game/app would get easily lost in the thousands of apps being released every week)

Some friends reviewed it 5 stars just to help it and well it is here in the store until this day.

It’s very ugly and its just Flappy Bird in landscape mode with different characters… But I was very happy I released it! I learned a lot about C# by just editing those already existing scripts from the clone I downloaded. I always learn better by doing it so after this project I started developing pretty much everything using C#.

For the art I used Flash because that’s what was used for Super Meat Boy (of course I did watch that movie, after all, who didn’t?!)

Also while learning all these things at the same time I learned about the keystore that you have to use to publish on the Play Store and we had a lot of trouble with it.

I think this took us like 3-4 months to finish. I can replicate this game in 1-2 days today, but it was a very exciting experience for me because it was the first time I released something that I thought it was cool. Shared with friends, received compliments for having finished this. Finishing the last year of high school knowing what I wanted to do was super nice.

At this time I was using dropbox and onedrive to share the project (what is source control right?!) and I remember I zipped the project and saved it.

Lately OneDrive was throwing notifications of memories from around this time 8 years ago. Here are some:

And if you don’t believe me about the not knowing how to use arrays, take a look at this:

It gets even worse, I was setting the same variable for all the initial positions

Wait, this is the best part!!!

The conclusion: Things really suck when we start learning hahah

If you want to check this bizarre little game, here it is. But be aware that the music is terrible and loud so turn that volume down!